Origins Of The BBQ Sauce And Things You Should Know

Barbecue is not complete without its’ sauces. Barbecue sauce or BBQ sauce is a staple on the dining table in the history of American BBQ party. Without any doubt, BBQ sauce is immensely popular.

From Kansas City to Texas, fans created their own blend of BBQ sauce and dips, unique to their state. While the battle for the throne is still hotly ongoing today. I am going take a break and introduce its’ origin and the different variations we have today.

How Did The Name Barbecue Come?

The sauce is made for the food, and if so, where does the Barbecue come from 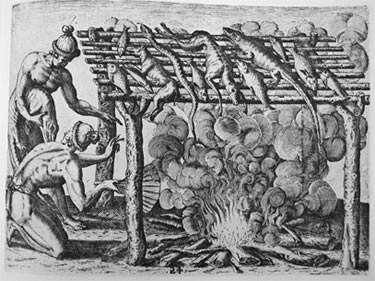 Long ago in the age of discovery, Spanish explorers set sail for the New World, which came to be known as the Americas, including Bermuda and Caribbean, and Oceania.

It was said that on Haiti island in the Caribbean, our Spanish explorers chanced upon the natives who spoke the Arawakan language, called Taino. Taino Indians, as we called them now, used a wooden structure, called a “Barbecoa” to smoke their food such as fish and other seafood found in the surrounding seas.

At this point in time, Barbecoa is not even remotely known as a certain type of food-processing method, by rather a structure.

Spanish, taken a liking to that method of cooking, took that along with the word back to Spain. For some time after that, Barbecoa was still used to refer to that structure. Slowly and amazingly, the term slowly evolved to Barbecue, possibly to make it easier for pronunciation.

Coined by a 19th-century bar owner (only evidence is the Feb 1982 Tarheel Magazine.

Another possible explanation came from the Feb 1982 Tarheel Magazine. It explains that the word Barbecue stems from a window advertising by a bar owner, written, Bar-Beer-Cue. It is a simple message to tell prospective customers that they are a bar providing beer and pool.

This explanation is less plausible as the only reference is Tarheel Magazine itself.

Another fanciful explanation. In French, Barbe-A-Queue means Beard and Tail. Barbe for Beard and Queue for Tail. This is supposed to refer to roasting a pig, where you cook it from Top to Bottom – Beard to Tail.

This explanation does not hold water. And pigs don’t have beards, well, except Bornean Pigs.

Variations By Base Ingredient

There are hundreds of BBQ sauce recipes out there, but they can all be sorted under one of these categories. Most common of all is the Tomato, then vinegar, mustard, and mayonnaise.

Sweet and thick. This reddish-brown sauce originates from Kansas City. It is made primarily from Midwest tomatoes, molasses, pepper, and other spices. This sauce is also the most common sauce in the US. Shelves are lined with bottles of these. A high chance that you are dipping your fries in this as well. Most tomato-based sauces is largely similar to this, except for a few minor differences where I wrote below.

Some recipes you can try:

Bought by the migrants who settled in Memphis, Tennessee and evolved over the years. This sauce is best known for its’ simplicity. This lighter sauce does not overwhelm the smoky flavor of the pork. Ingredients-wise, it is rather similar to the Kansas City sauce, with Tomatoes as the base. A slight difference would be Memphis sauce recipes contains more vinegar than Kansas.

Florida sauces are possibly Memphis-styled sauces with a fruity twist. Not only does it contain a higher percentage of Vinegar compared to Kansas City sauce, recipes that I have come across contained fruits. It can vary from oranges, papaya, mango and tamarind, The common factor among these dozens of recipes is using the fruits as a sweetener. Hence, Florida-Styled BBQ sauce has a more balanced taste as compared to others.

Hot! Hot! Hot! Possibly influenced by the brilliant marketing team at Kraft. You would have heard that Texas sauces are typically less sweet and spicier than its’ Kansas City counterpart. In a kind of self-fulfilling way, Texas-style recipes have spicy ingredients in it. Other than the usual ingredients, you will find that they would add chili peppers, bell peppers, spicy mustard and the like to it. Think of spicy? Think of Texas is probably apt.

Certain parts of South Carolina is known for its yellow barbecue sauce made from Mustard, vinegar and other spices. By and large, this sauce can be credited to the Germans heritage found in South Carolina.

All of us have seen our fair share of smoky, reddish, brownish BBQ sauces. White BBQ sauce strikes me as the most unique. Distinctive and a staple to North Alabama BBQ fans. This sauce is white due to the primary use of mayonnaise in the vinegar-based recipe.

One of the firsts in BBQ sauces. Vinegar and pepper sauces are said to be made and popularized by the Native Americans. These earlier sauces are made primarily with butter, vinegar, ground black pepper, and salt. It was used a sauce to baste the animal while cooking over fire pits and a dipping sauce after it was served. From the original recipe, the lack of use of sugar tends to give this a distinctive sour taste than others. If you are not used to sour, consider adding sugar to balance the taste, very much like the sauce we are going to introduce below.

Also known as Western Carolina sauce or Piedmont Dip. Coming from the west part of North Carolina. The residents from the area called “Piedmont” created this dipping sauce.

Very much like the East Carolina sauce above, its’ primary ingredient is vinegar with a little of tomato paste and sugar added. While it is a “dipping” sauce, it is not uncommon to use it as a rub on pork before barbecuing.

Variations Of Other Countries

Different from Americans, Australians do not view the BBQ sauce as a marinade but rather a condiment. So rather than slathering it all over the meat, you will generally use it on the side, like ketchup. Homemade Australia BBQ sauces are generally a blend of Tomato sauce and Worcestershire sauce.

To be honest, I have not tried my hands at making an Australia-styled BBQ sauce yet, only bought one off the shelves. If you want to try your hands at making it. This is a decent one.

Asia BBQ sauce – the Hoisin Sauce. Hoi means Sea and Sin means Fresh. Together, they mean Seafood. No, I did not type wrongly. As far as what I comprehend, Hoisin refers to food fresh from the sea, hence Seafood.

Hoisin sauce is more popular in the southern parts of China compared to the northern parts. Very different from American BBQ sauce – the Hoisin does not use tomato or vinegar as a base. It uses soy sauce and fermented bean paste.

Taste-wise, it is salty and not sweet nor sour. I do not use this as a dipping sauce, but more often as a marinade. Caution: it can be really salty!

Yes and no. For most BBQ sauces, tomato paste, or tomato sauce and vinegar form the basis of most barbecue sauces, homemade or store-bought. Other ingredients vary wildly from mustard, peppers, sugar or Worcestershire sauce. Therefore, whether BBQ is healthy or not will primarily depend on the ingredients used. If you are using tomato-based sauces, then the benefits will stem from it. Some benefits you can get are:

Studies have indicated that consumption of tomato-based products is consistently associated with lower risk of several types of cancer and to a lesser extent, coronary heart disease. [Ref 1]

Clinical studies found that tomato, containing lycopene, has been associated with a decrease in total cholesterol. [Ref 2]

But, there are also some detrimental effects, mainly, due to the presence of sugar or sweeteners or salt. It is well documented that over-consumption of sugar contributes to heart problems, liver problems and added calories. [Ref 3]

So, what is the conclusion? Seriously, there can be no end to the list of pros and cons vis-à-vis BBQ sauces. What matters more is that you enjoy that piece of good ol’ BBQ in front of you right now and keeping moderation at the back of your head. Over-consumption of anything – even good stuff, is bad, period.

I have come across many such questions over the years. For convenience and simplicity for everyone. I wrote what people ask and my answer.

1. How To Thin Or Thicken My BBQ Sauce?

Thick sauce usually refers to Tomato-based BBQ sauces. To thicken it, there are 2 ways that I will use. First, try to cook your sauce longer. This way will evaporate excess liquid and make it drier, hence thicker in taste. The other method is to simply increase the ratio of tomato sauce to other ingredients. Adding more tomato sauce will thicken it.

To thin the sauce, I would increase the ratio of other ingredients to the tomato sauce. Here, I would not recommend adding water to the sauce, simply because, it dilutes the overall taste rather than thinning it. However, if watery is what you are shooting for, by all means.

2. Can You Freeze BBQ Sauce?

Yes, you can. Bear in mind that before you store it in the freezer. You would have to cool it down to room temperature first. This is to prevent any cracking of the container. Second, do not fill your sauce to the brim of the jar, leave an inch or so for expansion as the sauce freezes.

It depends on your recipe. Generally, there is no element of meat in the recipes that I use so yes, it is vegan. Bear in mind that some recipes that recommend might use a non-vegan ingredient in their sauce.

For those store-bought sauces, you can check on their ingredient list to make a conclusion. Peta has a great list of vegan condiments here.

4. What is my BBQ Sauce Shelf Life? Especially for Homemade Sauce

The precise answer to this depends. Generally, it can last up to a month. However, it depends on your storage conditions. To maximize the shelf life of your homemade BBQ sauce, consider freezing it like above or refrigerate it.

For those store-bought sauces, is it safe to use after the “best by date”? Yes, the best by date refers to the manufacturer’s best estimate of how long the sauce will remain at the optimal quality in taste, smell, etc.

So, the best way to determine if your BBQ sauce is bad is to smell and visually inspect it. If you observe mold or there is a bad odor coming off it, it belongs in the bin, not on your food.

Have you ever thought why do people use the abbreviation, “BBQ” instead of “BBC” for barbecue? Obviously, BBQ or BBC are clippings of Barbeque or Barbecue. Chances are regardless of which spelling you used, others will be able to recognize what you are referring to, which makes this question even more interesting.

To best-guess, I have used a tool called Google NGram. Looking at it, the use of the word barbeque or BBQ gain traction in the 1940s – 1960s whereas Barbecue existed in the 1800s.

My guess would be the “Q” is in itself, an abbreviation of “Cue”, more so than any other reasons. Why? Because one other plausible explanation would be that the Barbeque was in use much earlier than Barbecue. I found this to be unlikely above.

It is a wild world out there. We have traveled through time to look at the history of BBQ itself, then introduced the different variations of BBQ sauces found across different states and other countries. I have also taken the chance to address some questions about the sauce. Now, you would be able to better appreciate the sauce that goes into your food.